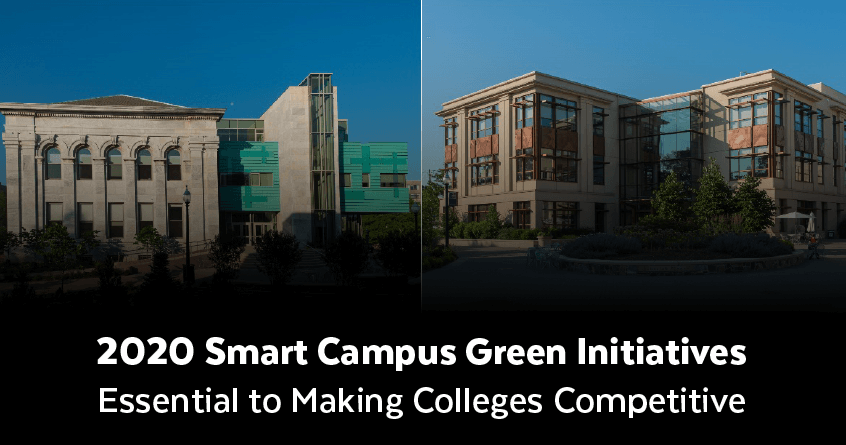 According to futurist, AI thought-leader, and IoT expert Richard van Hooijdonk, universities are innovating faster than cities. Facial recognition, immersive AR learning, and 5G hotspots are only a few of the ways academic institutions are leading the charge on technology adoption. Universities are pouring millions into green tech and smart campus initiatives because fewer stakeholders are interfering. “Universities own all the buildings,” states van Hooijkonk. “They own all the networks, and they have a captive audience in terms of the students so that they can become like a living lab.” 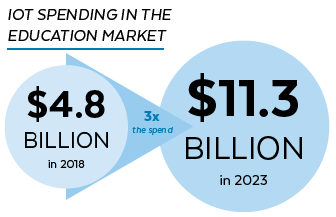 Hooijdonk predicts that IoT spending in the education market, which was $4.8 billion back in 2018, will reach $11.3 billion in 2023. At 3x the spend, that is pretty exciting news for IoT technology companies, IT administrators and the installer community. There’s some serious money to be made here, and these ultra-connected campuses will bring about a massive transformation at the university level in a relatively short time.

One source calls this digital transformation process the lifestyle “arms race.” Developers and campus planners are rethinking the student experience. How can the way students study evolve? What ways can learning in the classroom have a more significant impact on the students? And altruism aside, how can these advanced solutions increase enrollment and faculty recruitment to better reach funding goals?

A smart campus is more transparent and safe
The build-out of wired and wireless infrastructure is making it easier to identify problems and faster to communicate when students need help. The foundation of a vibrant campus network includes faster wireless LANs, network backbone switches, network security gateways, IP surveillance, and even VoIP products that support curriculums and enhance the learning experience.

The foundation for a smart campus is reliable wired and wireless connectivity, indoors and out. A fully connected campus is only the first step in building a Smart Campus. Smart technologies include:

“When people, devices, and applications on campus share a common technology infrastructure, they can interact with each other to enable experiences and efficiencies that weren’t possible before.” DotMagazine | Smart Campus – Merging Smart City and Smart Home in Education for Digital Natives

Green college campuses are usually at the forefront of progressive ideas and programs, and that’s certainly the case when it comes to protecting the environment.

These efficiencies and conveniences aren’t just making campus life smarter; they’re also making it more sustainable. When less money is being spent on utilities and operating physical plants, more can be allocated to other things like building out infrastructure to support car charging stations for campus owned vehicles.

In a 2019 press release, the Association for the Advancement of Sustainability in Higher Education (AASHE) ranked schools across the US according to their Sustainability Tracking, Assessment & Ratings Systems (STARS). In each of the top ten schools for electric vehicles (EVs), 60 percent of campus owned vehicles are EVs. Of the over 261 universities and colleges reporting their campus fleet details to STARS, 88 percent have at least one EV.

In a 2019 Princeton Review, 64 percent of applicants surveyed (approximately 12,000) would factor in the schools with environmental commitments when deciding where to attend. While the 100 percent renewable energy goal for campuses is still in the future, it’s clear that environmental responsibility is attracting young people.

Smart meets green with PLANET’S BSP-360 Renewable Energy Industrial 802.3at PoE Managed Ethernet Switch. Designed for surveillance or wireless network and remote monitoring and managing of the IP-based device, the BSP-360 is a four-port, Power over Ethernet (PoE) industrial-grade smart switch perfect for the college campus. The BSP-360 is IP rated to withstand extreme environments as well as moisture and dust.

Renewable energy also saves time and money by cutting down on person-hours needed to change batteries, removing the need for frequent manual maintenance.

MPPT (Maximum Power Point Tracking) charge controller
The MPPT (Maximum Power Point Tracker) is a DC to DC converter optimizing the match between the PV solar panels and the battery bank or utility grid. The MPPT converts output from a higher voltage DC source like solar panels (wind generators) to the lower voltage required to charge the BPS-360 battery.

Zero-carbon power supply
The nickel-cadmium or lead-acid battery recharges through the point where the solar power sources via the switch. The BSP-360 does not need cabling to recharge. Further, the battery charges during the day to sustain the nighttime operation of an outdoor wireless IP-based surveillance camera.

The BSP-360 also offers smart battery management, which means it displays current battery usage by percentage and has low voltage cut-off protection. It also allows admins to remotely access the power status of the battery and renewable energy, and estimated time of power consumption.