Philadelphia’s Version of the Smart City

The subject of smart cities is popular with our readers. One PLANET’s recent blogs discussed the Smart Campus Green Initiative, taking place on college campuses like the University of California Irvine. Another blog featured Toyota’s experimental Woven City, currently being developed in Japan close to the base of Mount Fuji. This blog takes a look at a smart city development that is happening stateside, in the historic city of Philadelphia.

What’s worth noting in the Philadelphia project is the initiatives driving it. The needs of the constituents, and not the shiny appeal of new technology, is the force that’s making efforts smarter. By allowing data specific to their residents and the particulars of their city–industry, curation of historic sites, and other factors–to inform decisions, the end result is more tailored. Besides more closely satisfying the needs of city residents, the allocation of money is also more targeted.

Some of the benefits of Philadelphia’s smart city project include:

“To be successful, smart city initiatives require governance of data, among other things, and stronger collaboration among the participants,” says Emily Yates Giulioni, smart city director in Philadelphia.

To get an idea of how smart city technology benefits a city like Philadelphia, you need look no further than OnePlus Systems. Based in Northbrook, Illinois, the company manufactures container fullness and control systems for waste management (trash pickup). Their systems equip containers with sensors. When a trash container reaches a certain weight (fullness), it transmits this information to a central database, where a routing app schedules pickup. Small improvements spread over an entire city can snowball and save a ton of money in a short time.

But data collection is not as simple as it might seem.

In a situation where you have disparate sources, data silos can skew the real picture. How insights are harvested isn’t the same for every data source, especially when it’s sequestered in departments that aren’t “talking” on a regular basis.

Data analysts in Philadelphia have pulled data from projects such as trash collection and public transportation planning, but they’ve also encountered roadblocks. The smart city project has experienced blindspots, where departmental data wasn’t readily accessible or known about. The reasons behind these issues can be as simple as outdated software or databases, and finding solutions can take disruptive effort to bring systems up-to-date. Cities like Philadelphia fully realize valuable information when access issues are addressed, and stakeholders work collaboratively.

Yates and her team are working to understand how departments are collecting data to better share data across their organization. One example is the effort to combine automatic vehicle location (AVL) data with location data from buses. Adding the location data field has helped prevent trash pickup from disrupting commuter schedules.

Collaborating across departments allows the introduction of the best insights into data pools and helps solve problems that are the highest priorities and affect the most significant numbers of citizens. But collaboration doesn’t have to stop there. Some cities are reaching out to private businesses to gather additional funding for projects that make sense. One such city is located in Northern California. 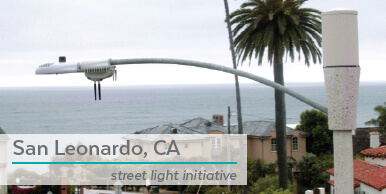 San Leandro, CA, has a street light initiative that has been funded by public and private dollars. Among other compelling aspects, including bulb replacement alerts, it introduced an IoT sensor mesh network with 4,800 nodes as part of its streetlight infrastructure. The sensors and cameras help manage traffic flows and lighting, as well as improve pedestrian safety and gather criminal and accident data that can aid in investigations.

Data needed in a scenario like the one in Philadelphia can be sent to a centralized data warehouse. In a time where developers are moving everything to the edge, centralized data storage still makes sense. Even partial data sets moved incrementally based on the right parameters can work. Lurking in the back of decision-makers’ minds is cloud storage and collocation and the cost of moving data to new locations.

Still, the benefits of having data sharing opportunities can end up saving departments a lot of money, including man-hours no longer necessary to track down information. Yates and her team are establishing a process of data governance to ensure data integrity and accessibility.

Comcast and the city of Philadelphia have joined hands to create a network to provide access in approximately 80 public parks and recreation centers. Both parties have a clear benefit from taking this approach. Comcast gains the business, and the city gains the telecom’s expertise.

But bright, shiny technology isn’t the critical factor. Bringing relevant solutions to the city is the basis for the success of partnerships like this. It’s pretty easy to get caught up in the race of more technology, and you end up leaving people out of the picture.

The groundwork for the smart city is more than infrastructure. At its core, it uses its intelligence and cognitive technologies, including AI and machine learning, to study the flow of life of its citizens. How they interact with their surroundings helps developers and municipalities deliver a better quality of life.

“More than half of the population in the world resides in cities, and by 2050 that number is expected to reach 68 percent,” says Thiru Thangarathinam, Forbes Technology Council Member, an invitation-only community for world-class CIOs, CTOs and technology executives.

Strong technology and data applications are not enough. Public adoption and thoughtful design are what leverage beneficial outcomes. Through transparency and clear communication, these initiatives gain support from the people they are designed to benefit.

Yates and her team are doing just that in the appropriately named–City of Brotherly Love. By allowing the data to move their efforts, the “user experience” in Philly is reaching new heights.