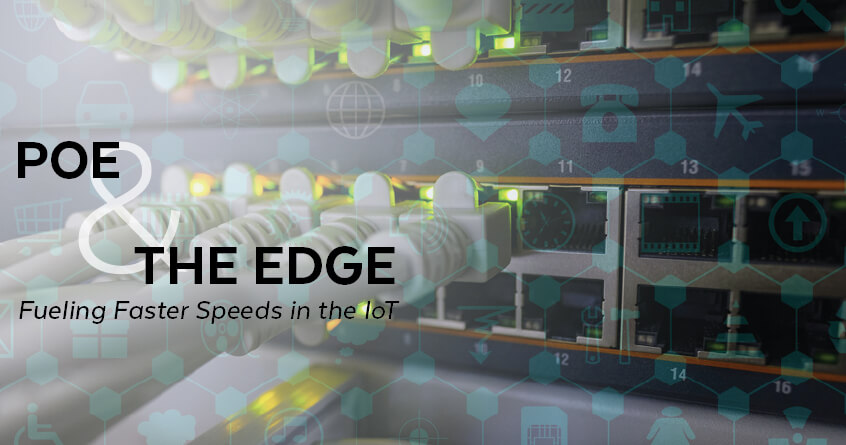 PoE and The Edge Fueling Faster Speeds in the IoT

As connected devices continue to multiply across the cyber landscape, the need for speed and proximity is increasing too. Traditional computing and storage models like those found in the cloud are not going to be able to meet the sheer volumes of data that end users are coming to expect. And while some centralized computing will need to remain, an alternative architecture is going to take over. That new model is called the edge, named for its closer proximity to the device. Edge computing is offering a more dynamic data process model, one that provides low latency and higher speed. Edge computing architecture is increasingly becoming an alternative to the cloud.

Let’s begin on a logistic level. Edge is a lot easier to build and maintain. Imagine the financial requirements to construct a cloud computing and storage facility. Start with millions of dollars in permits, cooling and construction, all located on a 20-acre lot. Now, compare that scenario to plunking a 20-foot shipping container at the base of one of the many wireless towers you see sprinkled across the countryside.

A Vapor Edge Module at a cell tower (a rendering).

It’s easy to see which is faster and easier to initiate, and the added benefits only begin there.
Smart cities and all of the connected devices are going to suck up a lot of bandwidth. With all of these devices competing for storage, analysis and computational headroom, things will bog down quickly without the relief from edge architecture.

The IoT isn’t just for mechanically lowering a blind on your window when the sun’s hot or checking the lock on your front door. It’s a moveable technology. Self-driving cars, for instance, will require the mobile responsiveness that edge computing can provide. Not having to send data all the way to a centralized hub eliminates latency. When a split second can save a life, response time is not a luxury but a necessity.

As devices connect to the internet, Power over Ethernet (PoE) is also keeping pace with the demands for more power and faster speeds. Faster speeds translate to more data delivery at the device level. As 5G continues to develop and become more widespread, data will also speed up–not only in edge computing architectures but in the way to the devices that are connecting to Power Supply Equipment (PSE).

Increase in maximum power per port

Type 3 and Type 4 versions of the 802.3bt standard have inched their power budgets higher from 51W to 60W (for Type 3) and 71W to 90W (for Type 4). The implementation of data delivery over 4-pair Ethernet cables is one of the capabilities driving this growth. To remain compliant, PoE power per port cannot exceed 100W, but a 100W budget is more than sufficient to support the expanding number of higher powered devices coming online in 2020.

These higher powered PoE devices include the following.

Increase in Gbps and the expansion of 802.3 standards

Transmission speeds continue to climb higher as the IEEE Working Group amends and develops these standards.

If you follow the list of active projects down, you find other interesting and related amendments in progress:

And the list goes on. The proliferation of devices connecting in a short time is driving the need for speed and close proximity to accommodate the increasing volume of data they generate.

Finally, it’s not only the place data is stored, the PSEs and the PD that is getting faster and more powerful–cable must also be able to handle the super highway of data transmission in order to retain the highest signal quality.

Cables that connect PDs are also getting faster 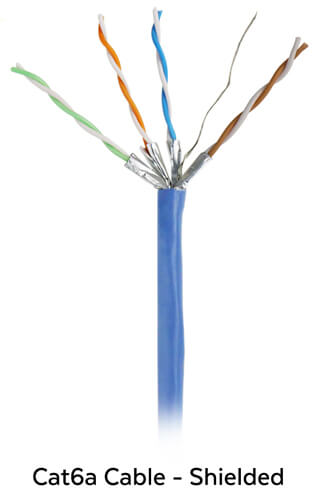 Although Category 5e cable is still considered viable and Cat6 the next best option in terms of cost, it is Cat6A that is going to bring the IoT through the next couple of technology refreshes. Cat6A, preferably shielded, offers PoE networks 4-pair balanced thermal and power efficiency for the new wave of 100W PoE device installation.

Shielding guards against power dissipation in a Category 6A cable. This allows more of the power running through the cable to transfer to the device. The design of the Cat6A to handle heat resulting from bundled cables in an IT closet or wall. This safety margin ensures that your PD can extend to a distance of 328 feet while still reaching the maximum PoE load.

Fiber cable, both single-mode and multi-mode, is being deployed between distantly located PoE networks. Single-mode fiber especially is allowing top speeds over long distances while traveling across extreme environments.

As the IoT moves further into smart homes and cities, and enhances working environments and public spaces, quality of life is becoming safer, more comfortable and efficient. We, as a society, have the potential to lessen energy use while still achieving our goals.

PoE and the edge are two of the heroes of this story. They are the result of thoughtful innovation and forward-thinking. Data that is closer to its point of use will not compete with as many other data sets as in a centralized configuration. Low-powered smart devices will continue to be developed and benefit the public while collecting data to inform further development for the future.

The IDC has recently predicted the number of devices will reach an estimated 41.6 billion and generate 79.4 zettabytes of data by 2025.