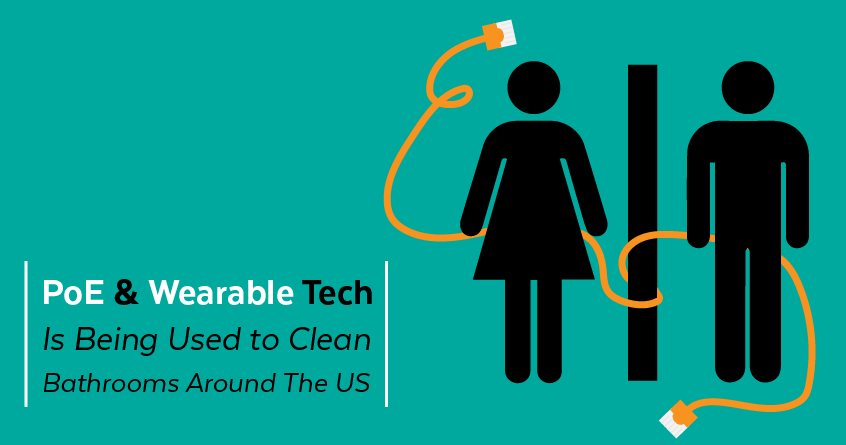 Public restrooms around the U.S. are becoming intelligent data-gathering environments as the smart building revolution gains momentum. They’re relying on Power over Ethernet or PoE and wearable tech to streamline janitorial workflows and enhance the overall user experience. That’s why several airport systems across the country, starting with Houston, have adopted smart bathroom technology.

Passengers using these smart restrooms are happy with the level of cleanliness they’re seeing. Let’s look at how airports are leveraging this technology to improve their ratings.

The Houston Airport System is among the earliest adopters of smart restroom technology in the U.S. Initially, it installed Trax (from Atlanta-based Infax) in all the restrooms at Hobby Airport. It deployed the tech in the 24 washrooms in Terminal A at Bush Intercontinental Airport also.

At such facilities, janitorial personnel and custodial supervisors want to deliver cleanliness based on demand instead of a rigid schedule.

So they need an efficient way to track washroom traffic in real-time. With the Trax solution, PoE sensors monitor the number of passengers that have entered individual restrooms. If the count hits a preselected threshold, such as 300, the system notifies the relevant personnel via email or text.

On-standby cleaners or supervisors monitor the system for such alerts via mobile devices, for example, tablets.

Houston has also deployed tablets that passengers can quickly access to provide feedback after using a restroom. Via interactive surveys, the system collects data on cleanliness and passenger experience. The captured responses help to manage the airport’s restrooms more efficiently. 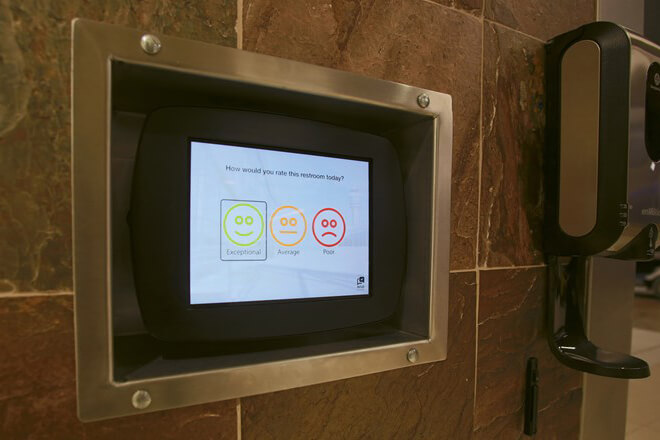 It’s also possible to passively track on-duty janitorial staff with Trax. This way, custodial supervisors can see which employee cleaned which restroom, and when.

Airports can enhance the passenger experience further with PoE-powered digital signage outside of each restroom. These displays can indicate the number of unoccupied stalls as well as show when the facility was last cleaned.

Here’s what Skytrax had to say about Bush Intercontinental after upgrading the airport from a three to a four-star ranking:

“One of the most notable upgrades has been to the critical area of terminal cleanliness. Skytrax has witnessed improvement in cleanliness at most customer touchpoints, and a progressive rollout of smart washroom monitoring has played a significant part in this turnaround in standards.”

PoE and Wearable Tech for Smart Restrooms at Cincinnati Airport

Cincinnati/Northern Kentucky Airport is also leveraging wearable cloud-based technology to enhance hygiene in all its 56 restrooms. Its janitors wear smartwatches that alert them each time there’s a need to clean or restock a specific bathroom. There, the threshold for sending a notification is 150 users.

Also, the facility’s restrooms have sensors for tracking visitor throughput.

Hipaax’s TaskWatch app powers the smartwatches that janitorial employees at the airport wear. According to the airport’s chief innovation officer, Brian Cobb, the application enables janitors to complete checklists for work done, digitally. The system transmits this information to the cloud so that other janitors can retrieve it via their TaskWatch smartwatch app. 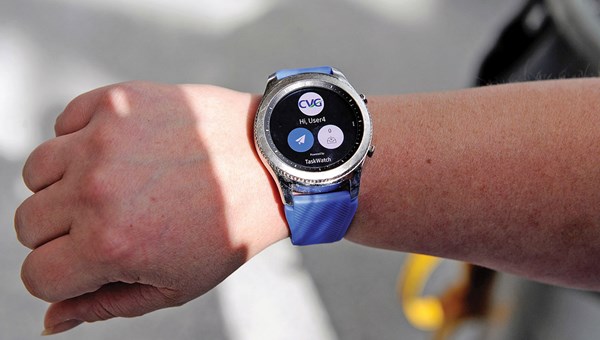 Also, the system employs location-based tracking, and it sends notifications to the smartwatch closest to the restroom requiring cleanup.

Since TaskWatch is analytics-driven, it can capture data about restroom visits to inform the deployment of janitorial personnel. For example, insights from the app show that most female passengers go to restrooms nearest to the gates where they arrive. But men tend to use facilities further away, such as around baggage claim.

A 2017 report by Airport Councils International showed that washroom cleanliness is the most critical measure of customer satisfaction compared to other features of an airport’s infrastructure.

After Cincinnati deployed the TaskWatch system, the approval rate of its restrooms in third-party audits rose from 87% to 94%.

The Role of PoE in Smart Bathroom Tech

Ethernet is capable of powering the ecosystem of a smart bathroom. It can deliver enough power to low-voltage, 30W devices, or even to 100W hardware components, regardless of their location.

In a smart restroom setting, PoE has a couple of critical use cases, such as:

Interactive survey tablets
PoE is ideal for thin clients and a host of low-power devices. The restroom tablets that the Houston Airport System uses to collect visitor feedback are a perfect example. A vital aspect of such interactive displays is the built-in support for PoE as per 802.3af or 802.3at standards.

WAPs
Power over Ethernet is well suited to wireless ecosystems, such as the one supporting smart washrooms at Cincinnati/Northern Kentucky International Airport. With wireless tech interconnecting all system devices, including wearables, janitorial staff can share data captured via their smartwatches. 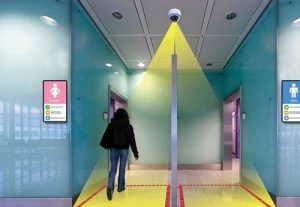 Smart sensors
Ethernet can deliver the right amount of power to the sensors that track the volume of restroom traffic. An example is Bluetooth beacons for location-based use cases. In smart bathroom applications, these sensors are ideal for sending proximity-aware notifications to the relevant janitorial staff.

Digital signage
If you wanted a convenient way to deliver real-time information to the users of your restrooms, digital signage would be an excellent choice. With PoE, you can provide power anywhere, including to wall-mount displays outside each bathroom.

PoE Simplifies the Setting Up of Smart Washroom Systems

PoE and wearable tech simplify the installation of smart bathroom ecosystems and devices. With Ethernet cabling in place, all installers have to do is add the powered devices (PDs) to the network. It’s a cheaper and quicker way to set it all up.

What if you wanted to install tablets outside the washrooms to collect user feedback? PoE would give you the flexibility to deploy the devices anywhere without having to worry about the location of AC outlets.

All you’d need to get started is the power sourcing equipment in your network server room. The fundamentals may include PoE switches, PoE injectors, and of course, Cat5e or Cat6 Ethernet cabling.

Would you like to discover more about PoE and wearables for smart restrooms? Get in touch with one of our experienced technicians right away!