PLANET’s IPOE-E174 is an industrial 1-Port Ultra PoE (IEEE 802.3bt) to 4-Port 802.3af/at Gigabit PoE Extender designed for point to multipoint PoE applications. The IPOE-E174 can obtain a maximum of 75-watts PoE power from the ultra PoE (IEEE 802.3bt) input port and supplies a maximum of 60-watts PoE power budget for the 4 PoE output ports. This extends both Data and PoE over the standard 100m (328 ft.) Cat. 5/5e/6 UTP cable to 200m where up to 4 powered devices (PDs) can be powered at the same time. The IPOE-E174 provides a simple solution for adding PoE ports without running more cabling and achieves more flexible network applications without requiring an external power adapter. 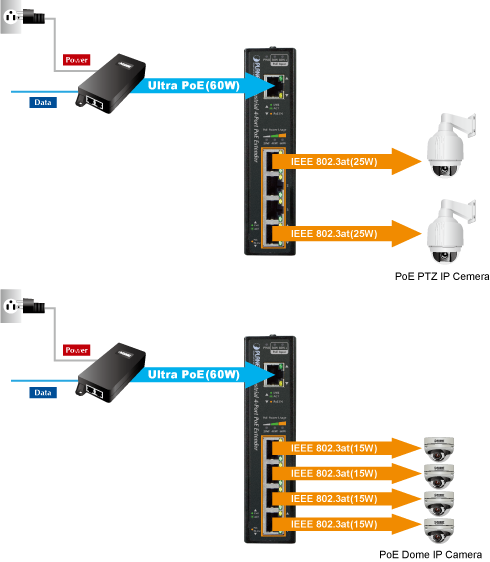 With industrial-level IP30 metal case, the IPOE-E174 provides a high level of immunity against electromagnetic interference and heavy electrical surges which are usually found on plant floors or in curb-side traffic control cabinets. Being able to operate under the temperature range from -40 to 75°C, the IPOE-E174 can be placed in almost any difficult environment. 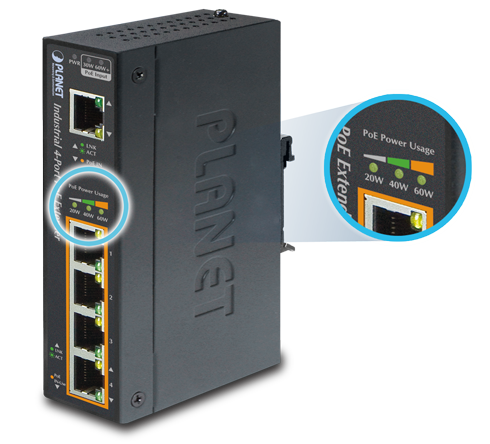 The IPOE-E174 is quite easy to be installed by simple plug and play. It is used between a Power Source Equipment (PSE) and the Powered Device (PD). The IPOE-E174 injects power to the PD without affecting the data transmission performance. The IPOE-E174 offers a cost-effective and quick solution to doubling the standard range of PoE from 100 to 200 meters. The IPOE-E174 is designed in a compact mini box containing 5 RJ45 ports, of which the 1 “PoE IN” port functions as PoE (Data and Power) input and the 4 “PoE OUT” ports on the other side functions as PoE (Data and Power) output. The “PoE OUT” port is also the power injector to transmit DC voltage over the Cat. 5/5e/6 cable and transfer data and power simultaneously between the PSE and PD.

The GS-4210-16UP4C is a 1U, Gigabit 802.3bt PoE++ Managed Switch featuring PLANET intelligent PoE functions to improve the availability of critical business applications.

The POE-171A-60 is a Single-Port, multi-gigabit 802.3bt PoE++ Injector with a maximum of up to 60 watts of power output over Ethernet cables.

The PoE-163 gives both IT industries and at-home users a solution for high power output and simple installation.

POE-163
$39.60
The PoE-163 gives both IT industries and at-home users a solution for high power output and simple installation.