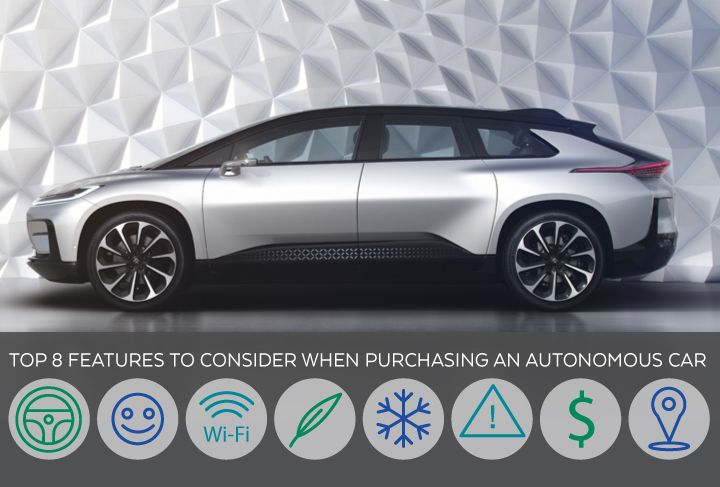 Top 8 Features to Consider When Purchasing an Autonomous Car

The Consumer Technology Association (CTA) announced two weeks ago that a sizeable chunk of the discussion at CES International 2017 would center on the Autonomous Car. Suffice to say they were on to something.

Data shows that Gen Z Millennial consumers are particularly interested, and with good reason. Industry analysts predict machine driven cars will result in a significant drop in both accidents and fatalities.

Though the young crowd may be abuzz with the prospect of robot chauffeurs safely zipping them them to and from the workplace (or the bar), the idea behind self-driven cars is anything but new.

You can find these shiny phantoms in the pages of fiction or on television. There’s the television and movie variety of sci-fi cars, like the ones in Knight Rider or Transformers. Or there’s the type described in Isaac Asimov’s short story about a driverless car uprising called Sally.

Regardless, autonomous cars are no longer in the realm of fiction or imagination. Recent highly-publicized test cases include the Google autonomous fleet currently in operation in Mountain View, CA, and an Uber test fleet in Pittsburgh, PA.

Remarkably, these cars are on the verge of going mainstream. In fact, Michigan just passed legislation that allows private citizens to own and operate their very own Self-Driving cars.

Why Purchase an Autonomous Car?

The popularity of the autonomous car may tie into the plight of the working man or woman. The frustrations and dangers of the daily commute may have finally taken its toll. Or maybe it’s simply that technology has finally come far enough along to match up to our hopes for the future of transportation.

In an article published last year, The Washington Post revealed that the average commuter travels at least 52 minutes per day. That adds up to almost 21 days spent commuting each and every year.

It’s all too understandable that our community at large is ready to take back some of that precious time. The desire to take back some of that lost time has elevated the prospect of a driverless car from the realm of a fancy dream to a practical antidote for the road weary. The driverless car provides an attractive alternative to bumper-to-bumper traffic.

Additionally, the safety and predicted drop in accident rates should not be ignored. In fact, this is one of the driving forces behind the recent rush to full autonomy.

With all of that in mind, we thought it an appropriate time to discuss features consumers should consider when preparing for a driverless car purchase. There’s a reasonable chance that if you make a car purchase in 2017, it will have some level of autonomy present.

Experts are preparing for driverless to go mainstream. Let’s educate ourselves and be ready for the coming change!

Many consumers will want to retain the ability to drive their car when it’s enjoyable. Look for a car that offers both capabilities.

“When you hit bumper to bumper traffic,” says Richard Candler, GM Advanced Product Planning for Nissan Europe, “You may want to recoup time spent commuting and reassigning it to other priorities.”

But on the open road, many of us will still want to be in control of the car and enjoy the driving experience. There’s no need to entirely sacrifice one for the other, as many upcoming autonomous vehicles still retain the ability to be manually piloted.

2. Personification of your vehicle

In a recent joint-faculty study in Chicago, experts found that personification removes high tech stress. It’s even been shown that you can reduce the stress during your commute by simply naming your car [source: Adam, Heafner and Epley].

In other words giving your car a name, gender and voice increases our willingness to trust its safety features, and feel at ease handing over control. Check out Toyota’s new concept car that perfectly embodies this: the Concept-i.

Hackers are notorious for taking advantage of public wifi and injecting malware to steal personal information. This is an increasingly large public concern when it comes to autonomous vehicles.

No matter how this issue develops going forwards, keep your eyes peeled for any and all information on which cars provide the most secure wi-fi access. 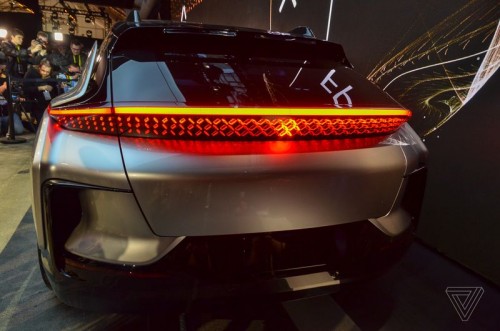 Faraday Futures released their latest design on Tuesday, January 3rd, at CES International 2017, in Las Vegas before the press. Not only is this car off level 4 autonomy but it’s also an ultra-fast sports car. It’s rumored to cost over $100k and slated for public availability in 2018.

Cameras, Radar, and Laser Scanners work together to sense what is happening around your vehicle. These components track the position of other cars, pedestrians and obstacles. They also register the position of lane markings. Unfortunately, when snow covers these markings some systems are still experiencing difficulty with navigation.

Look for cars that have been proven to safely negotiate roads when lane markings are obscured by snow, dense fog, and other conditions that diminish visibility.

Features include collision warning systems, 360-degree cameras and drowsiness alerts. While you may not be doing all of the steering in the near future, these features are still critical safety measures that should be there for the times when you do.

“Other smart features include adaptive cruise control, which monitors and keeps cars within a distance from preceding vehicles; lane keep assist, which identifies lanes and keeps cars from accidental veering, and electronic stability control, which actively slows a particular wheel to keep turns under control. While many of these features are available now, safety technology is expected to surge in 2017…” – Cleveland Clinic

7. Wait until the price comes down

Fully-autonomous personal vehicles could be seen on the road as soon as 2019-2020. Additionally, off-the-shelf self-driving kits are expected to make their way to consumers in 2019.

You can now get your hands on a semi-autonomous Honda Civic for around $20,000 total. That’s a bargain to be sure. But the more advanced fully-autonomous cars that are just around the corner are expected to come with a hefty price-tag.

If budget is a concern, you might want to push out your purchase an extra year or two. As with all technological advancements, the cost of entry will continually fall as time goes on.

One large benefit of having all of these navigation sensors, it that your car will be able to maneuver safely and efficiently in and out of tight spaces.

Even if you’re not purchasing a fully autonomous car, this is a convenience feature that should be near the top of nearly all driver’s most-wanted list.

Experts are touting 2017 as the year that autonomous cars push into the mainstream. While the price tag remains high, the benefits of having even a small percentage of autonomous cars on the road are hard to ignore. Estimates on the number of lives saved vary widely, but some sources predict a 90% drop in accident rates.
For those looking to take the plunge into the exciting new technology of the autonomous car, be sure to check out CES 2017 which just wrapped up in Las Vegas.