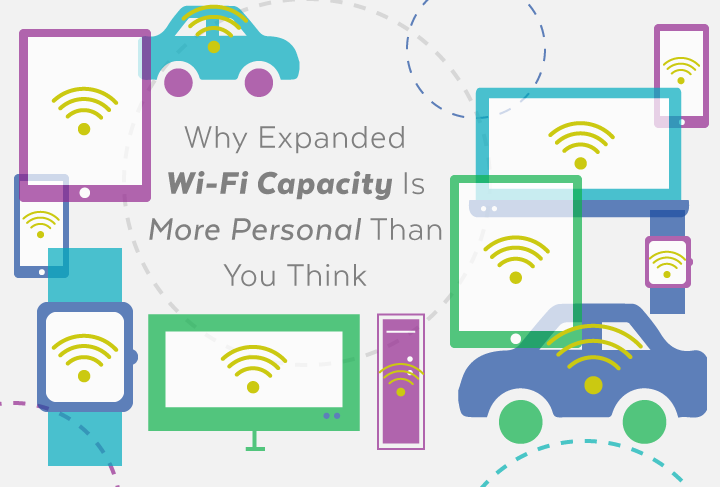 Why Expanded Wi-Fi Capacity Is More Personal Than You Think

If you read our most recent article, you’re hopefully up to speed on the new end-to-end solution Qualcomm released for Wi-Fi, 802-11ax.

At least one source believes this technology will appear in products for the 2017-2018 holiday season.

While the new IEEE 802.11ax Standard isn’t altogether complete, the good news is that the days of not getting a signal or constantly ending up connected to sluggish Wi-Fi networks with low capacity will soon be coming to an end.

The reality is, 2017 mobile users won’t necessarily need expanded network capacity at Starbucks or a busy university commons. But the almost 20B devices set to come online in the next 5 years won’t just belong to other people. A surprising number may actually belong to you, and that number is only going to increase as we grow further and further into the Internet of Things.

How Much Expanded Wi-Fi Capacity Should Users Expect To See?

More and more, capacity – not peak speed – is becoming the most important measure of a network’s quality. It more directly correlates to the network’s ability to handle the ever-increasing demands of today’s milieu of application and services. Rahul Patel, senior vice president & general manager of connectivity at Qualcomm Technologies talked about this recently.

The latest Qualcomm chip solution is expected to grant up to 4x the capacity of the previous 802.11ac Wi-Fi version with 4x the speed. That’s a nice start.

But eventually, end users can expect to see even more improvements as the frequency spectrum opens up.

Wireless is going to be moving from the 4G model (which taps into ranges from 6 GHz and below) to 5G. 5G utilizes millimeter waves that require less space, and will thus be able to expand into a much larger frequency spectrum between 30 and 300 GHz.

One extra benefit to the 5G model is that current data speeds, those falling between 1 Gbps and 5 Gbps, will still remain relevant for the near future. This will allow enterprises to continue taking advantage of existing Ethernet infrastructure.

With that in mind, let’s look at a couple of these new technologies that require a higher Wi-Fi Capacity.

For the record, Ultra High Definition (UHD) content streams at well under the 1 Gbps threshold. That limit is now doubling and even quadrupling while still traveling over existing Ethernet infrastructure.

The challenge comes when you have someone streaming Virtual Reality and others on the same network streaming UHD content.

Virtual reality is growing increasingly mainstream as the price of VR Viewers drop and word of all of the exciting applications gets out.

Some of the places where Virtual Reality (VR) is making strides for the betterment of mankind:

Having the ability to view things in VR can literally save lives.

Biotech is already using 3D printing to clone in the laboratory. The added ability to view things in 3D using VR could assist scientists even further.

VR isn’t only good for rehearsing difficult surgical procedures or chemical modeling. People are also enjoying VR at home for entertainment purposes. You only have to jump on YouTube to find excellent VR video resources.

Marketers have even gotten in on VR. Destination British Columbia, a Canadian travel bureau, provides virtual site tours for Events Planners to help them understand the pristine natural environment visitors can enjoy when they visit.

Achieving the necessary level of Ultra-High Definition on a smartphone requires a hefty amount of data. 802.11ax will be able to provide enhanced connected experiences, such as 4K Ultra HD video streaming, which supports VR technology.

[Link for this device https://www.wareable.com/vr/best-iphone-virtual-reality-setup]

You don’t need to wait for the Autonomous Car to get a vehicular connection. In fact, cars are already tapping into Wi-Fi.

Some cars have even become Wi-Fi access points. These automotive networks provide everything from NetFlix for the kids to watch on long trips to GPS updates to keep you out of traffic snags.

The Autonomous Car is definitely coming soon to the general public. Estimated data consumption rates of up to 1 Gbps and up to 4,000 Gb per vehicle per day are set to ramp up the need for a lot more capacity.

802.11ax technology offers speeds of up to 4.8 Gbps, and maintains fast connections over larger coverage areas which definitely addresses challenges for connected cars.

Expanded capacity is what will sustain the enhanced connected experiences that the newest technologies like VR and Self-Driving Cars provide.

Better network performance helps people work better and live better. Ease of getting onto networks will support greater densities we are already seeing. Finally, automated low-power systems will save money and help reduce our footprint on the environment.
If you’d like to know more about the upcoming Internet of Things ramp up, check out our free guide.