Research Director at Gartner predicts that the Internet of Things (IoT) market will generate a $300 billion revenue and sell approximately 26 billion devices by 2020. According to Gartner, consumer-grade units will form a substantial portion of this market.

Many of these consumer-grade products will stem from the home automation industry which has generated an onslaught of solutions for consumers seeking to transform their homes into “Smart Homes”.

The home automation industry is introducing two solutions—Zigbee and Z-Wave— leading some consumers confused over which standard to choose. But this isn’t another technological battle between two competing technologies, as occurred with the competition between  HD and BlueRay DVDs.

Zigbee was originally standardized in 2003 and Z-Wave has been around since 2008. These standards have had enough time to mature since their first generation iterations. New adopters will not necessarily be considered early adopters.

What is the difference between Zigbee and Z-Wave? 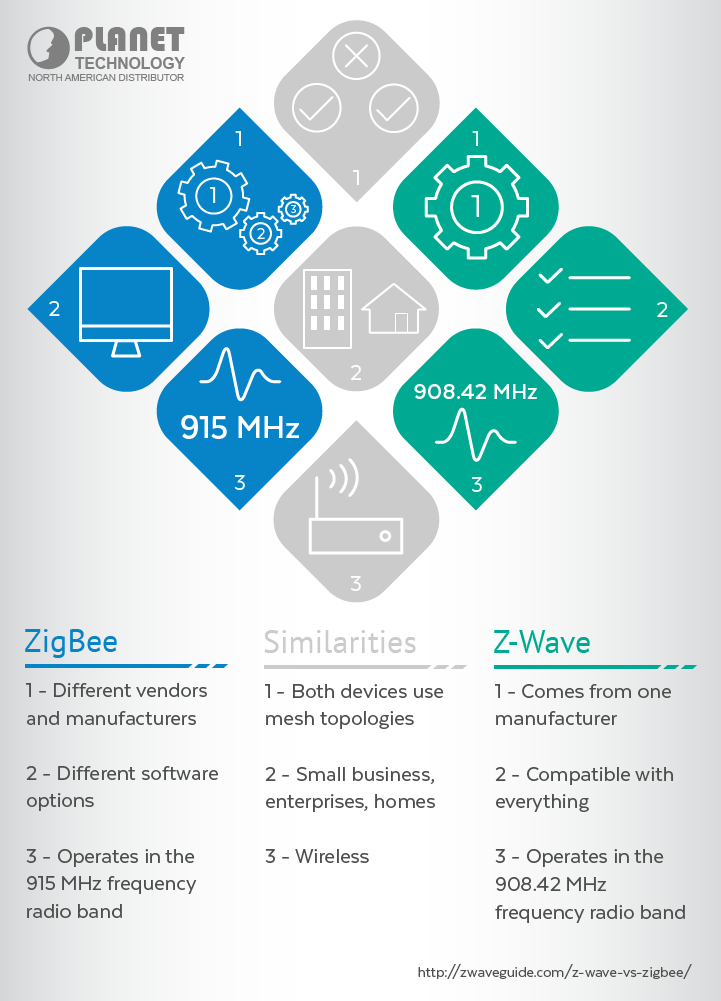 Zigbee and Z-Wave technologies form part of the 802.15 home automation standards. Though these two standards are used for similar use cases, they vary in hardware, software, and compatibility scopes.

Zigbee is a chipset manufactured by several vendors and each vendor can accompany the chipset with their own software. Zigbee utilizes the 2.4GHz ISM radio band (915 MHz in the USA) and can interfere with Wi-Fi and Bluetooth transmission signals.

Sigma Designs is the sole manufacturer of the Z-Wave chipset and supports one software option. Z-Wave, also known as the G.9959 standard, operates in the 900MHz radio band and also uses the low power sub 1GHz RF to achieve longer distances. This lower radio band prevents interference between Z-Wave and other wireless communication protocols including Wi-FI and Bluetooth signals.

Which standard should I choose to automate my home?

Even though Zigbee is a royalty free chipset, the home automation standard provides more flexibility to hobbyists and tinkerers who want to invest their time in learning to configure devices. It can be a frustrating experience for everyday consumers to purchase a Zigbee unit and find that it does not communicate with the other devices on a mesh network right out of the box. Z-Wave on the other hand, will allow customers to seamlessly connect devices to a mesh network. The latest standard, Z-Wave Plus, is designed to offer a more consumer-friendly interface with simple  ‘plug and play’ installation. Because Sigma is the sole manufacturer of Z-Wave, Z-Wave devices are interoperable right out of the box making it the consumer choice for home automation industry.