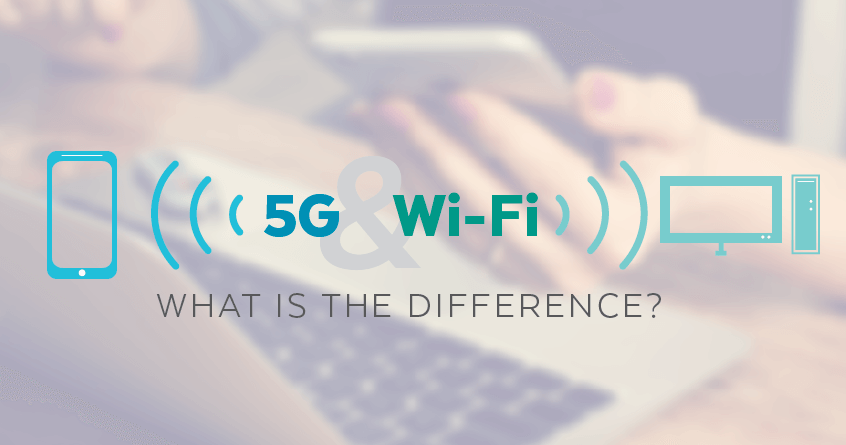 5G and Wi-Fi: What is the Difference?

Over the past several years, many consumers adopted Wi-Fi 5 (802.11ac) that operates at five gigahertz (5GHz). At the same time, the mobile industry began chatting about the fifth generation of cellular network technology (5G). These similar labels cause confusion as many think Wi-Fi 5 and 5G are the same.

To add to the mix, the Institute of Electrical and Electronics Engineers (IEEE) developed Wi-Fi 6 (802.11ax), which some assumed was better than 5G. To further complicate things, we now have Wi-Fi 6E (802.11ax), capable of supporting 6GHz and the 2.4 GHz and 5 GHz bands used by Wi-Fi 6.

Let’s start with this: Wi-Fi and cellular service are NOT the same things —5 GHz Wi-Fi is a frequency band, while 5G is the latest “generation” of broadband cellular networks.

5G is the latest global wireless standard that provides a new type of network designed to connect everyone to everything. This technology is truly revolutionary as it promises to increase download speeds, virtually eliminate latency, and reduce network congestion.

Cellular (mobile) networks operate on electromagnetic spectrum bands licensed (auctioned) to the highest bidder. Carriers such as AT&T and Verizon pay to use these bands (.i.e., frequencies). To recover costs, these companies depend on their customers to pay for subscriptions.

Unlike 5G, Wi-Fi operates on an unlicensed spectrum that is free for anyone to use. Simply put: an Internet Service Provider (ISP) is paid to deliver the internet to a home or business, and then a router is used to cover (route) traffic between devices and the internet.

Wi-Fi uses two frequencies: 2.4 GHz and 5 GHz. The 2.4 GHz frequency has a slower speed but has a more extended range, while 5 GHz delivers faster speeds but does not penetrate things like walls as easily.

Following is a list of the most common Wi-Fi standards in use today:

It is probably not necessary to say, but in our busy, impatient society, speed is everything. 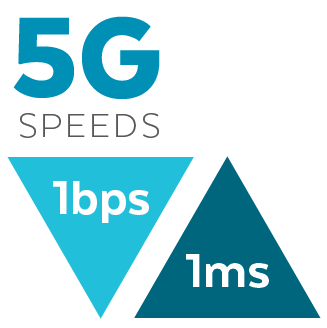 With 5G, we have the exciting promise of download speeds of 1bps (billions of bits per second) to 10Gbps and an upload speed (latency) of 1ms (millisecond). It is important to note that speeds like this are similar to those accomplished using a physical Ethernet connection.

However, the actual speed of a 5G connection depends on many factors, such as:

A realistic goal is to reach a minimum download speed of 50Mbps and latency of 10ms, which would constitute a significant improvement over 4G Long-Term Evolution (LTE). 5G is expected to expand slowly and work hand-in-hand with earlier generations of mobile networks (such as 4G LTE) and Wi-Fi.

Wi-Fi labeling has been quite confusing (e.g., 802.11b, 802.11a, 802.11g, 802.11n, and on to 802.11ac). The Wi-Fi Alliance, the non-profit organization that promotes and certifies Wi-Fi technology and the industry at large, has come to recognize the need for less baffling labels. As a result, the latest Wi-Fi standard is currently marketed as Wi-Fi 6. This more straightforward naming protocol is being modified to earlier iterations of Wi-Fi. For example, 802.11ac will become Wi-Fi 5, 802.11n will become Wi-Fi 4, and so on.

The new Wi-Fi 6 standard provides speeds that are at least four times faster than Wi-Fi 5. Also, it offers efficiency and capacity enhancements that help manage the increasing number of internet-connected devices in the average home. Just like 5G, Wi-Fi 6 complements, not replaces, the previously existing Wi-Fi standards.

As of April 2020, the Federal Communications Committee (FCC) voted to open up a new spectrum in the 6GHz band. The Wi-Fi Alliance has named this Wi-Fi 6E (802.11az). This means there are many more open airwaves that provide faster and more reliable connections from next-gen devices.

It is important to note that Wi-Fi 6E is not a new generation of Wi-Fi like Wi-Fi 6 is. Instead, it is a designation that identifies Wi-Fi 6 devices equipped to operate in the latest mass spectrum that sits in the 6GHz band.

5G and Wi-Fi: Better Together

Although 5G and Wi-Fi handle network management differently, they do have common functionalities. Both technologies offer gigabit speeds and low latency. In order for users to maximize their experience with today’s digital world, 5G and Wi-Fi have been designed to coexist and complement each other.

Because of its longer range, 5G will be used for: mobile connections (like smartphones), connected cars, smart city deployments, and large manufacturing operations.

What about the future?

5G is positioned to provide a tremendous boost in performance that may compete with cable or fiber options. This cutting-edge technology offers consumers another choice by bringing wireless broadband into the home.

However, Wi-Fi is likely to continue to be the most efficient way to connect the increasing number of devices throughout the home (e.g., PCs, tablets, smartphones, smart speakers, home security cameras, thermostats, and appliances).

There are a number of exciting applications just on the horizon that will involve the Internet of Things (IoT). As one example of this: machine-to-machine communication is the key to automation in factories. In a managed manufacturing environment, Wi-Fi 6 may be the best option, while 5G may be better suited to a large campus-wide manufacturing operation.

Further, in some cases, Wi-Fi and 5G may be used simultaneously. An example of this scenario is a connected car that uses Wi-Fi for in-car devices, while the car itself connects to a 5G cellular network.

For a closer look at:

To learn more about Planet Technology USA, contact us here.